Added each ETF's share classes and their listings with corresponding symbols, currencies and the exchanges where they're traded

As an example, iShares Core MSCI World UCITS ETF is traded on London Stock Exchange (XLON) as SWDA in GBP and as IWDA in USD, on Euronext Amsterdam (XAMS) as IWDA in EUR, on SIX Swiss Exchange (XSWX) as SWDA in USD and as EUNL on Deutsche Boerse (XFRA). So each exchange has a different combination of ticker/currency for this given ETF.

If you look at the Bogleheads wiki, for example, they just give you a long list of all the ETFs and their listings but don't tell you which ones to choose and why. So when I was deciding for the three fund portfolio, I had no idea which symbol at which exchange in which currency to choose. So I just picked them somehow randomly without thinking about it and hoped for the best. But in the end, I ended up with quite a weird combination of ETFs bought on different exchanges in different currencies that is far from optimal and it would be cheaper if I bought a different set of them.

So for each ETF, I wrote down all the share classes, whether they are hedged/unhedged against currency risk, accumulating/distributing, their total expense ratios (TER) and their listings together with the symbol, exchange and in which currency it's traded. Since there are many possible combinations of those share classes and listings, I looked at the different options, compared them and bundled them together for investors from different countries and with different preferences/requirements. This way it's easy to pick a bundle of ETFs to get the lowest total TER, reduce/avoid exchange fees and to buy them all at one exchange to avoid exchange connection fees (if your brokerage charges them). Also, only useful information is showed. So, for example, the currency in which the ETF is denominated is not shown because it influences neither the performance nor its costs and hence is not relevant.

Last Thursday, I was scrolling through Twitter and I saw @marckohlbrugge's tweet where he was asking what are others working on right now. That was a perfect chance to get the word out so I made few minor updates and replied to the tweet. That was actually my first tweet ever (when I am not counting the automatically generated tweets with the articles I liked). And I was really surprised! I immediately got some likes, retweets, some traffic to the site (150 unique visitors as of now) and also got some positive feedback on GitHub. I was also asked if there's a way to get notified when there are some new portfolios or updates so I set up a mailing list via Mailchimp and already have three subscribers. I know those are not huge numbers but I was really excited anyway since I did not plan to share it yet and this was a nice bonus. And also the positive feedback keeps me motivated and makes me feel that I might be on a good track.

Moved to JAMstack and made the site mobile friendly

From a technical point of view, I also made some changes. When I was thinking about how I will promote the site I realized that I will have to move it to a paid Heroku plan. However, at the same time, I realized I don't need a Flask app to serve the content to begin with. I could just generate a static HTML page with the portfolios and host it somewhere for free. So I got rid of the Flask app and wrote a little script that takes the data and a Jinja template and generates an HTML with all the portfolios. (I later found out that a fancy name for this set up is JAMstack.) Then I just published it via surge.sh and pointed the domain at it.

To make the deployment easier, I again set up continuous deployment using GitHub Actions so it's deployed to surge.sh with each push to GitHub.

As for the data, I decided to switch from YAML to JSON. Below, there are some reasons why I decided to do so:

Besides that, I also added Financial Instrument Global Identifiers (FIGI) to all share classes, listings, and benchmarks (if available) so that they can be referenced.

Finally, I update the look/design of the site and made it mobile-friendly. 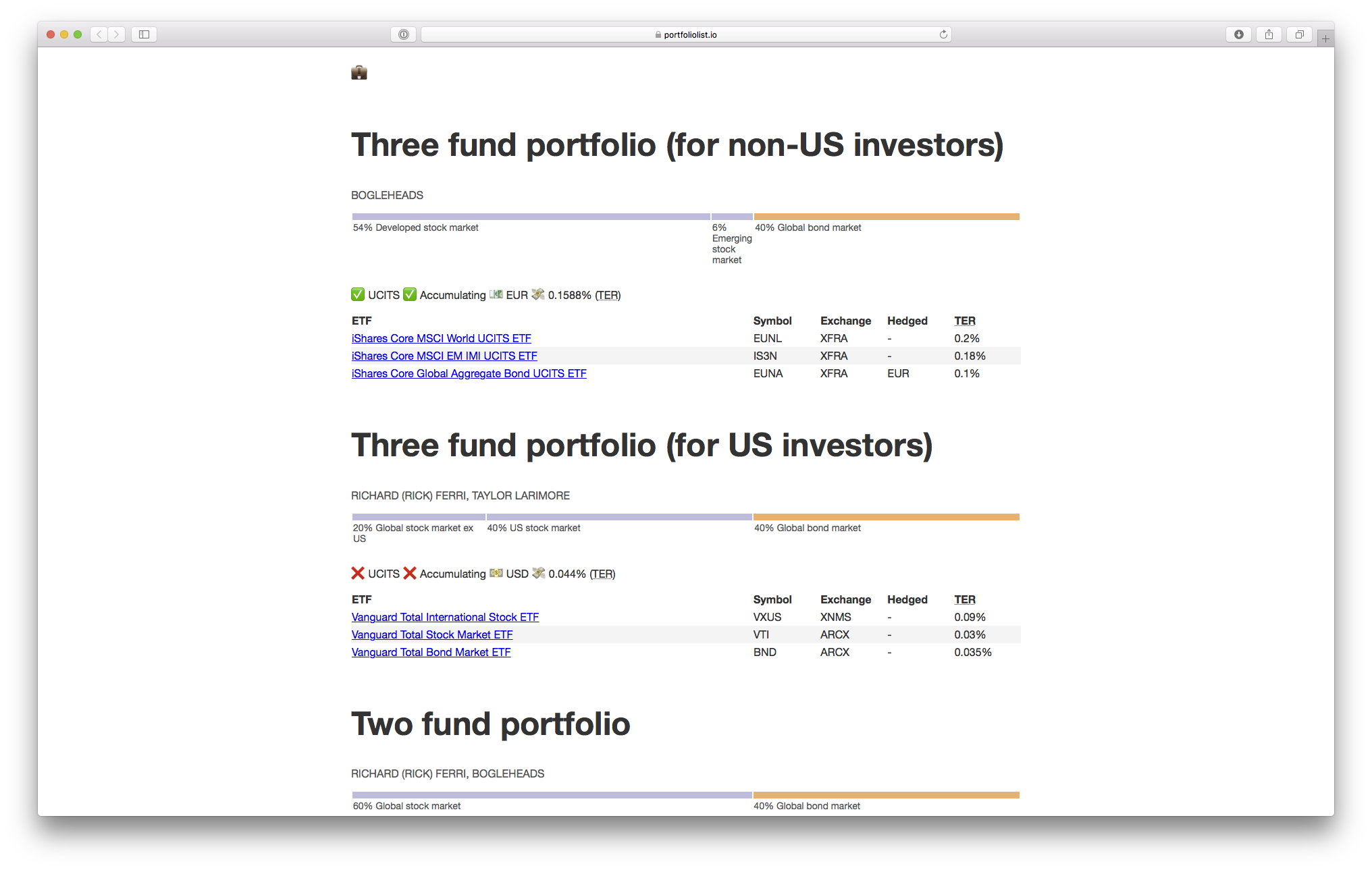 I gave up time tracking since it sucks but I wanted to give it a try (again).

What's up for the next week?

Next week, I would like to finally add more portfolios and create a calculator that would tell you how many shares of which ETFs you need to buy to fulfill your portfolio given the amount you want to invest, your citizenship, the number of shares you already hold/own and so on.

If you have any comments, feedback or questions, let me know on Twitter or via email.

Also, feel free to buy me a coffee. ☕️